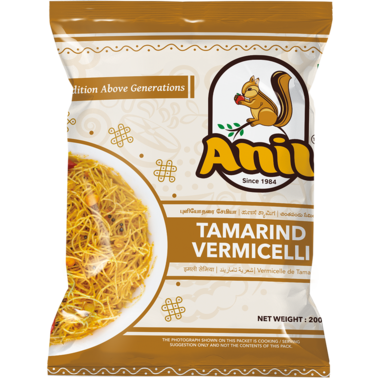 Tamarind Vermicelli is a delicious dish that is loved by most people across the regions of South India. It is a traditional dish cooked mainly during festivals, special occasions and parties. It tastes sour, spicy, hot and salty. The sight and aroma of this tangy preparation fills one with pleasant memories as it is cooked in many families when they all met with each other and enjoyed preparing this dish. When tamarind is mixed with rice it is called pulihora which is a common preparation of South Indian cuisine. If 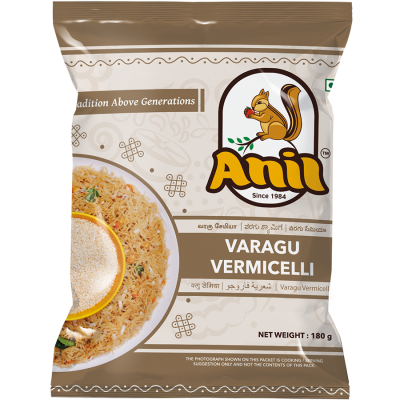 Lunch is the most important meal of the day. Being the main meal of the day, lunch should be healthy to provide the body with the maximum amount of nutrition. As the body tends to function most efficiently during the day and continues to spend energy until evening, it is best to ensure lunch is nutritious and tasty. A lunch packed with good nutrition will provide you with sufficient energy to refuel the body to perform various tasks for the rest of the day. Research says that those having a 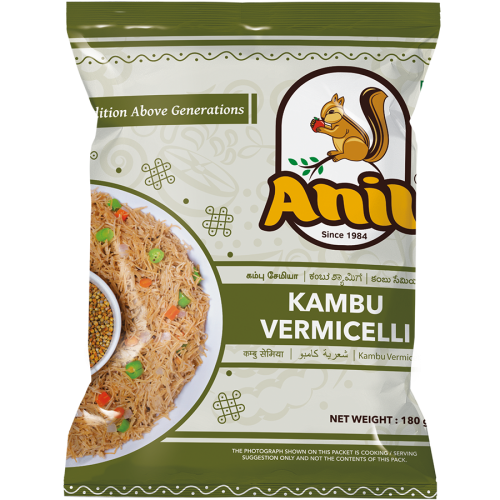 In order to maintain energy, you need to consume healthy and nutritious food with sufficient calorie intake. When you eat a balanced meal, your body receives the fuel it requires to manage your energy levels. Lunch is in the middle of the day and eating a larger and nourishing meal for lunch can help the body stay energized throughout the day. To many, lunch is the biggest meal of the day over dinner. It’s important to have a nutritious lunch because the daily food habits at noon can offer several 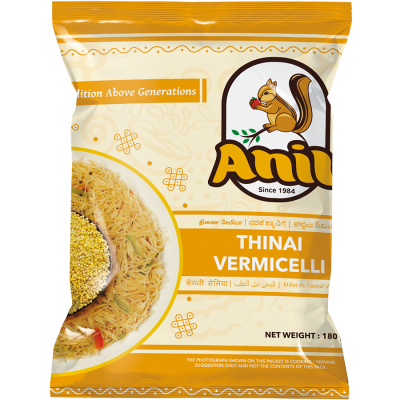 Foxtail millet is one of the oldest of all the cultivated millets. Foxtail Millets is not new to India. It was a staple diet among the people of ancient India. Foxtail Millets are very old that no wild plant of the species is known to exist today, according to archaeologists. Foxtail millet in Telugu is known as Korra or Korralu, Kangni in Hindi, Thinai in Tamil, Navane in Kannada and in Malayalam, it is Thina. Nutritive & Health Benefits of Thinai (Foxtail) Millet Foxtail millet is rich in dietary fibre, 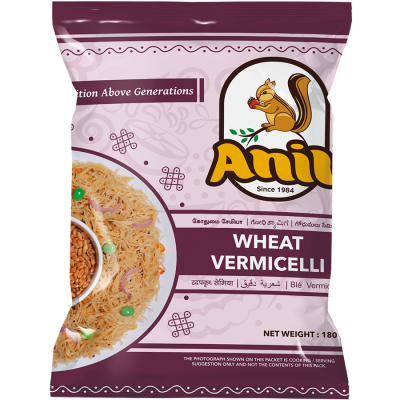 There is a growing popularity among the consumers for traditional foods due to their health benefits, and wheat is one among them. Traditional foods like vermicelli are the expression of our Indian culture, history and life style. Wheat Vermicelli is a traditional product prepared by using whole or refined wheat flour. Hard dough is prepared, cold extruded and dried in the sun. In wheat vermicelli, wheat flour remains as the basic ingredient used. Addition of various other ingredients to it brings in other flavours. The shape of Vermicelli appears like 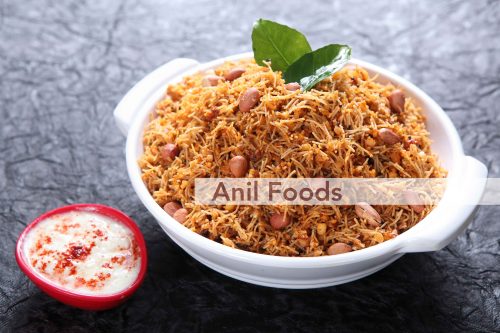 Breakfast is often described as an important meal for the day as it provides many benefits to our health and well-being. Having a healthy breakfast is a great way to start your day. Eating a nutritious breakfast refuels your body, replenishes your blood glucose levels, provides your body with the essential vitamins and minerals for proper growth, better immunity, bone strength and carbohydrate and protein metabolism.  It also uplifts your mood, improves concentration levels, helps maintain a healthy weight and fights fatigue. Breakfast is a great opportunity to consume nutritious

Diabetes has become a highly problematic and increasingly prevalent disease worldwide. Lifestyle and dietary regulation can have a great influence on life quality for those that suffer from diabetes. Millet has been shown to be potentially beneficial in the management of diabetes. Because they are digested more slowly than refined grains, which have been stripped of the germ and bran that cover the starchy endosperm, Millets maintain a lower glucose and insulin response in the body than refined grains. Regular consumption of millets helps avoid dangerous increase in blood sugar 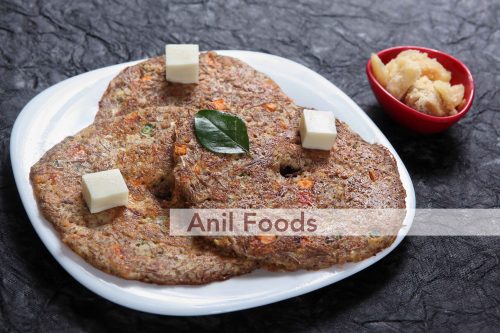 Ragi or finger millet (Eleusine Coracana) is a well- known cereal that is highly nutritious but often ignored when it comes to including them in our daily diets. However, in Southern India, a generation ago, many were familiar with this millet and consumed it as a part of their daily diet. Ragi also known as Nachni is known for its nutritive and therapeutic value along with numerous health benefits. Ragi is considered one of the most nutritious cereals. It has different names in local languages. It is known as Ragi 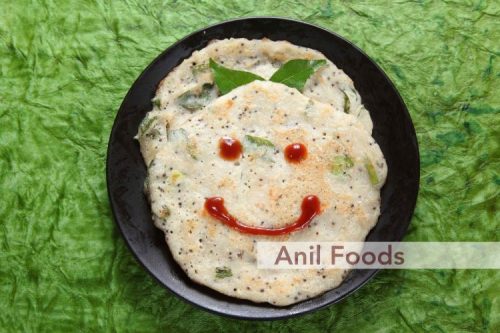 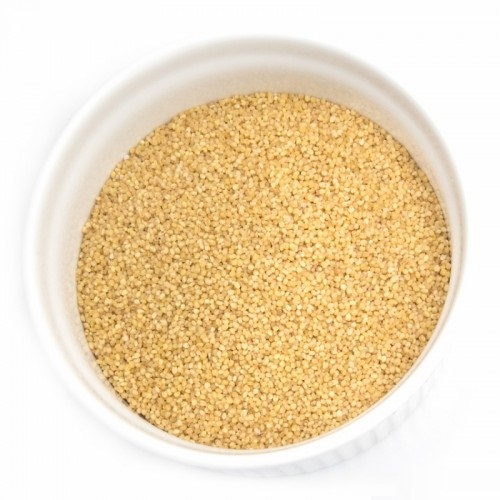 Foxtail or Italian Millet called Thinai in Tamil is one of the forgotten grains that belong to the old Tamil culture. Foxtail millet is a grass that grows in a warm climate and is more environmentally friendly as it requires very less water for cultivation in comparison to rice. It is a staple food of South India and a perfect substitute for healthy diets. Foxtail millet is called Korra in Telugu, Navane in Kannada, Kangni in Hindi, and Kang in Marathi. It can be cooked just like rice and millet 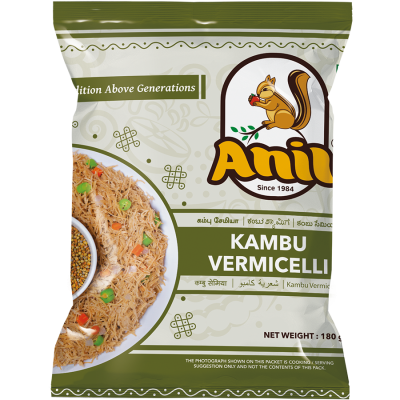 Millets are becoming increasingly popular among health-conscious owing to their immense health benefits. Kambu is called Bajra in Hindi; Pearl millet in English, Sajjalu in Telugu, Bajri in Gujarati. India is the largest producer of Kambu. Kambu or Pearl Millet is considered as one of the best foods that can provide nutrition and health to your body. Nutritional Value of Kambu It is a high energy food which is packed with Iron. Kambu has 8 times Iron content higher than in Rice. The rich Iron content in Kambu aids in 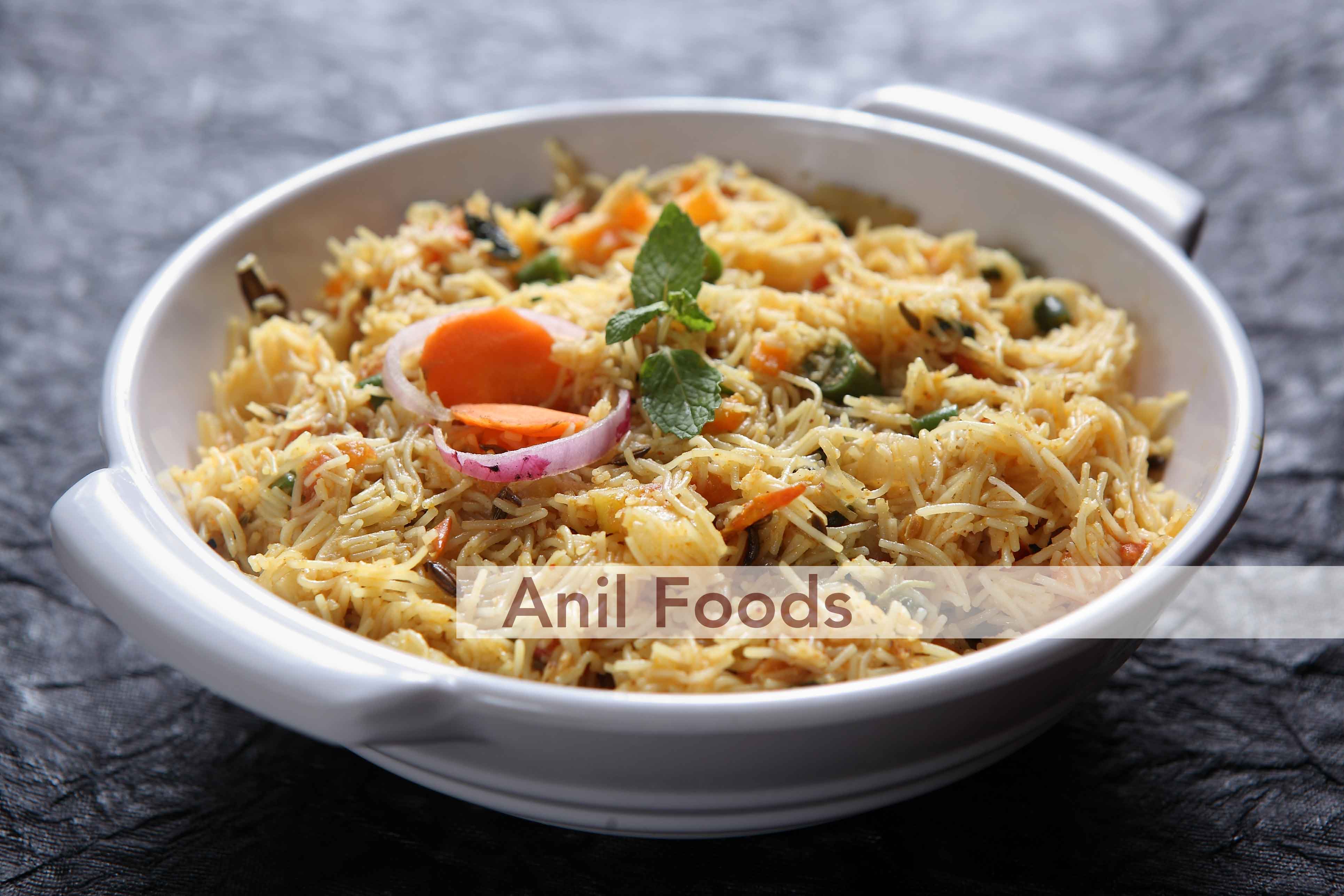 Corn or maize is one of the most popular cereal grains in the world. It is a grain plant that originated in Southern Mexico. Corn is the staple food of many and is the most harvested grain in the world. It is used in many different ways like corn flakes, tortillas, corn flour, corn vermicelli and corn syrup. Corn is known as Challi in Hindi, Mokka Jonnalu in Telugu, Makkacholam in Tamil, Cholam in Malayalam, Musukina Jola in Kannada, Makkai in Gujarat, Marathi and Punjabi and Butta in Bengali. How

Soya chunks are a high protein meat substitute. Vegetarians have always been benefited from this alternative food protein whose texture resembles that of meat. Soya chunks are obtained from soya beans at the time of extraction of soybean oil. Also known as meal-maker, these high-protein foods are available in the form of chunks, nuggets, mini-chunks, and granules for those wishing to reap the health benefits of this wonder food. Nutritional Value of Soya Complete Protein The soya beans that contain meat alternatives are complete proteins which have all the essential amino 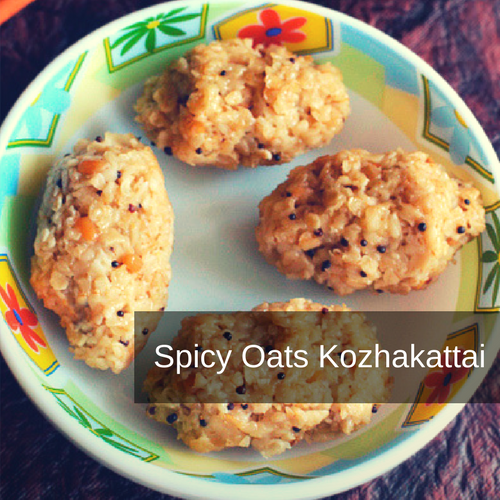 Kozhakattais or Modaks are a wonderful delicacy which is soft and smooth in texture. It makes a perfect morning breakfast or even an evening snack. This spicy dish comes in various shapes and sizes and is prepared with oats and rice flour. You can enjoy oats in several ways. Oats are a rich source of fiber, both soluble and insoluble. Since they help to stabilize blood sugar levels, diabetics can consume oats regularly. This recipe can be prepared easily and it is healthy and filling too. Children will love this 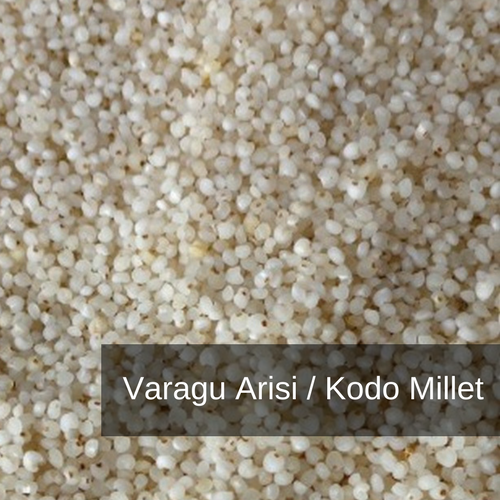 Kodo Millet or Varagu is indigenous millet cultivated in Tamil Nadu since ancient times. The botanical name of Kodo millet is called Paspalum Scrobiculatom and it is called Koden in Hindi, Varagu in Tamil, Arikelu in Telugu, Koovaragu in Malayalam and Arka in Kannada. Why is Varagu Healthy Millet? It is a nutrient-rich grain and 100 grams of Varagu has around 8.3 g protein, 65 g carbohydrates, 1.4 g fat, 5.2 g fiber, 35 mg calcium, 188 mg phosphorus, 1.7 mg iron, 15 mg thiamin and 2 mg niacin. The

Kozhukattai or Modaks are steamed dumplings generally made of rice flour, jaggery and coconut. The practice of making Modaks came to our country India from East Asia through traders in olden days. It is a tasty and a healthy snack suitable for both young and old. Kozhukattai or Modaks are a wonderful delicacy which is soft and smooth. It makes a perfect morning breakfast or even an evening snack. This dish comes in various shapes and sizes and is prepared with rava and rice flour. The recipe given below uses 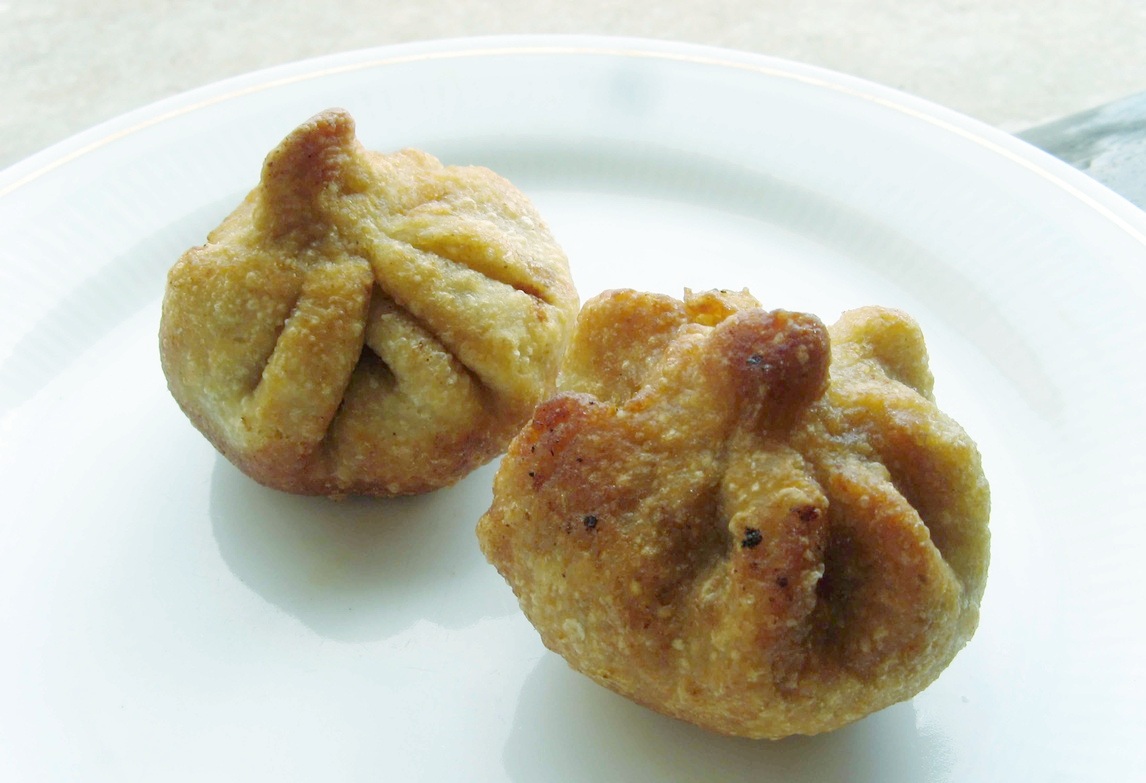 Modaks are steamed or fried dumplings generally made of rice flour, jaggery, and coconut. The recipe of Modak is said to have originated from the state of Maharashtra. It is considered to be the favourite food of Lord Ganesha. Modaks are offered to Ganesha during Ganesh Chaturthi festival to invoke his divine blessings. Modak is called Kozhukattai in Tamil, Modhaka or Kadubu in Kannada, Kudumu in Telugu. Modak is a wonderful delicacy whose soft shell is made of rice flour or wheat flour or Maida. Fried Modak is deep fried 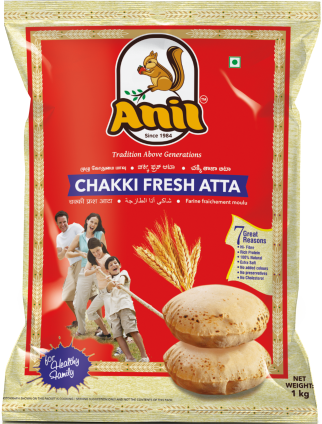 Chapatti is a favorite dish in the Northern Part of India but today South Indians are also in love with this Indian flat bread. But soft and fluffy chapattis can be made only from the best chakki Atta. Anil Chakki Fresh Atta is 100 percent whole wheat grain, rich in nutrients, vitamins, and dietary fibre that is important for a healthy digestive system. It also helps to lower blood cholesterol and helps you get more fit. Natural Whole Wheat Chakki Atta is stone ground and processed from selected premium wheat 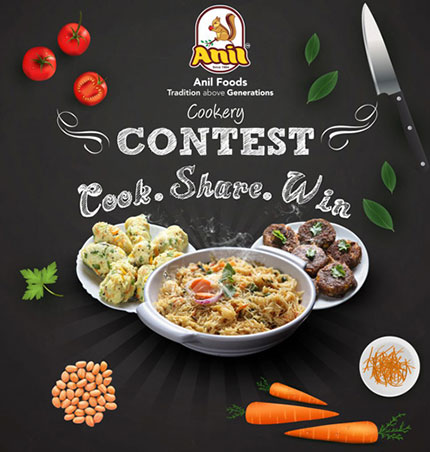 Cooking competitions can be fun and exciting because of the suspense and wonders of what might bring in the end. If you love cooking or you are a great cook who can make tasty food, then we invite you to participate in our cooking contest. Anyone who has passion for food, a bit of creative inspiration, and loves the thrill of competition, they can be part of this contest. All you need is to just take a few hours away, get inspired and cook your best dish using Anil Food 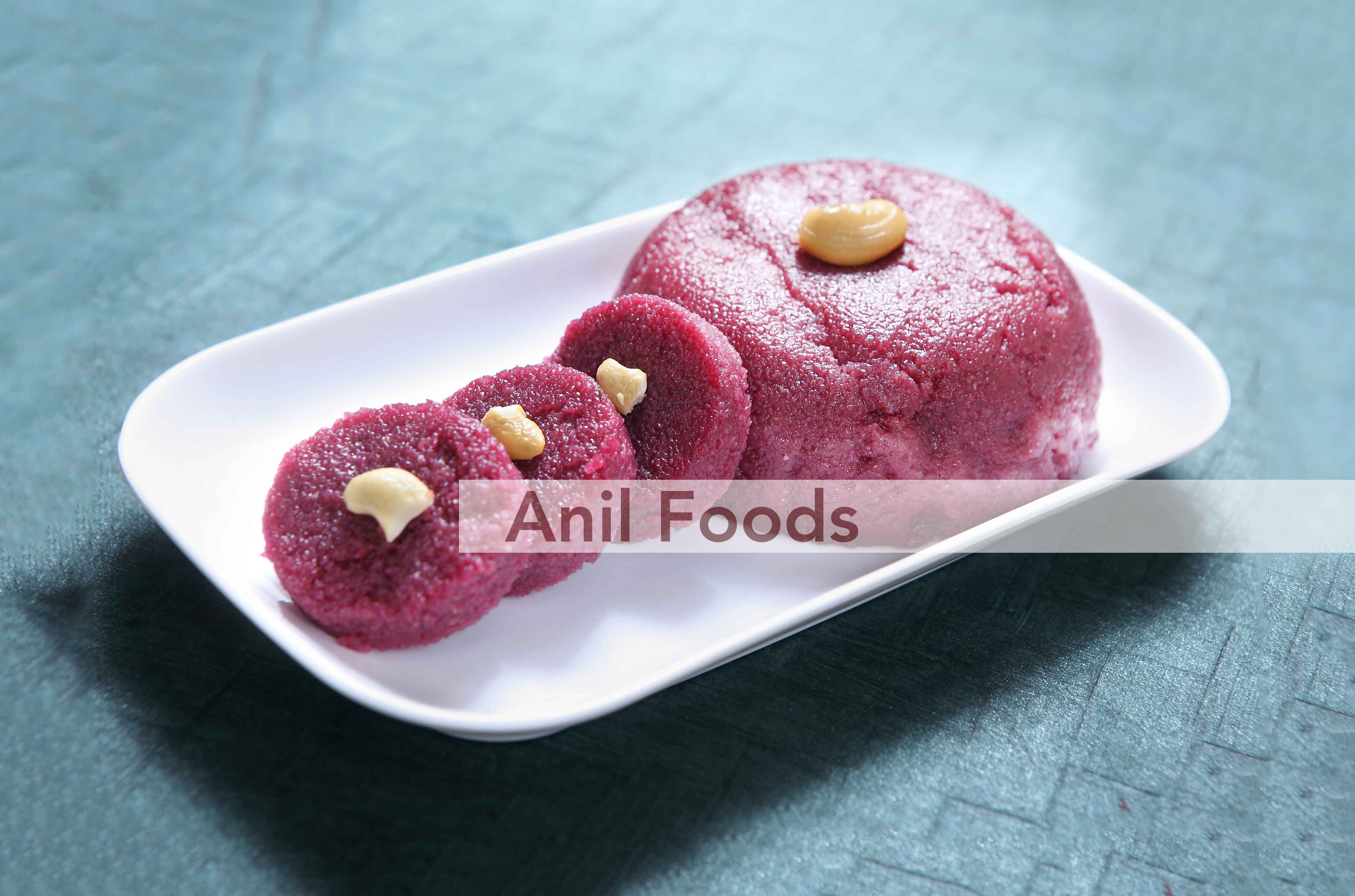 Sooji/Suji/Rava is a gritty coarse type of flour that comes from durum wheat. Granulated wheat which is otherwise called Semolina is produced from the hard red wheat berries whose bran, germ and endosperm are separated and the endosperm breaks into fine grains during the milling process. It is called Semolina or Sooji in North India and Rava in South India. Buying the ingredient Semolina is off-white or yellow, depending on the variety of wheat it was made from, and resembles coarse sand in texture. There are many kinds of semolina